Balestrate is a lively coastal village is agriculturally oriented. It is located about 35 km west of Palermo, facing the sea (Castellammare del Golfo). The main towns in the western part of the island such as Palermo, Erice, Isole Egadi, Sciaccam Mazzara del Vallo, Marsala, etc. are by car or by train very easily accessible. Excursions to the temples of Segesta (20 km), Selinunte (50 km), Agrigento. 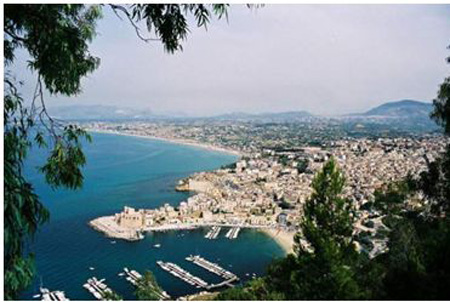 Castellammare del Golfo is a place worth visiting with its quaint old town on the edge of the bay of Balestrate. 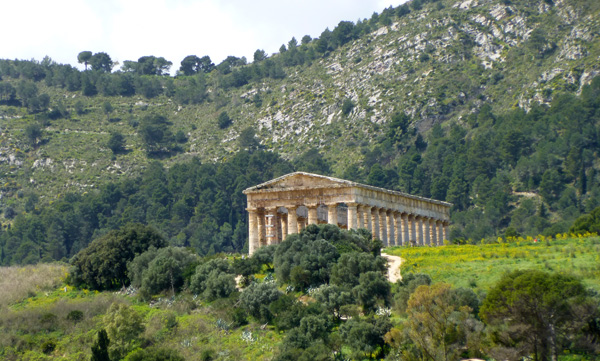 In the vicinity of the residential complex there are many testimonies of the ancient past, as this temple of Segesta. He was not built by Greek immigrants, according to some, but by the people of the Elimi, before the island was part of the Roman Empire. 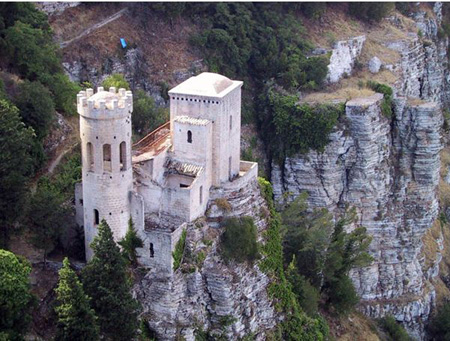 Near Trapani, on the top of Mount Erice, 751 meters high, of course, protect, lively and lonely, a small and precious jewel of our province.
For centuries, Erice is due to its beautiful panorama, its calm and the fog cloud, this place is often hidden from prying eyes, the preferred location for studies of the scholars and the prayers of the religious. Due to the small and winding streets, the typical medieval arches, richly decorated houses and small shops Erice preserves its ancient charm even today.
It has the shape of a perfect three-sided triangle, crowned by the castle on two peaks in the south-east, and Venus of the Mother Church in the south-west. In the center stands the church of San Domenico, which is now the headquarters of the prestigious International Center of Scientific Culture "Ettore Majorana" under the direction of Prof. Antonino Zichichi, who founded it 1963rd
The city is also known due to the local bakery, which are devoted to the nuns for a long time.
If you should be in the area, you should not miss the celebration in honor of Maria SS di Custonaci, the patroness of the city. The festivities begin throughout the countryside of Erice in the week preceding the last Wednesday in August. Experienced its peak during the festival procession through the streets of Erice.
On Good Friday takes place the procession of the Mysteries: In the midst of this medieval mood groups move through the city with statues, which reproduce the main stages of the Passion of Christ. 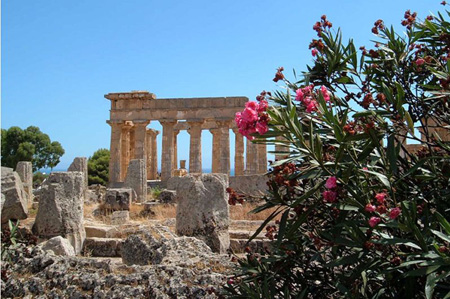 Selinus (Selinunte) is one of the largest archaeological site in Europe. The ancient name of this city was Selinon, which means wild parsley. Probably because they gave you the name was to be found in this area, the wild parsley in a stronger form. Today, this part belongs to the province of Trapani and is located south of Castelvetrano, near the south coast in the western part of Sicily. 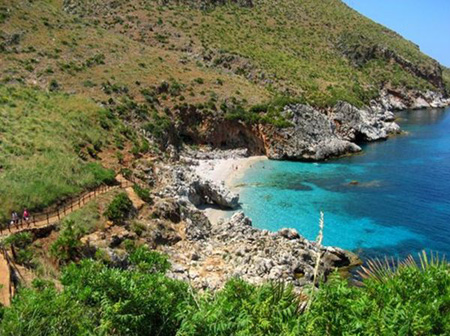 Nature Reserve in Sicily, Riserva Naturale dello Zingaro, an approximately 5.5 times 2.5km wide area and primitive, wildly beautiful rocky mountain landscape with good hiking possibilities between majestic towering limestone mountains and beaches and the turquoise-blue sea.
The Natural Reserve of Zingaro (Italian Riserva Naturale dello Zingaro Orientata) is a regional nature reserve in the province of Trapani in the northwest of Sicily.
As in the 1980s, the construction of a highway along the most scenic stretches of coastline from Castellammare del Golfo to San Vito lo Capo was planned, there was considerable public protest.
The government relented and subsequently built the Zingaro Nature Reserve is the first in Sicily. The reserve covers 1600 ha and has about 40 different species of bird habitat. Especially birds of prey such as hawks, vultures and eagles find ideal living conditions.
Today, the magnificent coastal scenery to be explored on hiking trails. The simple, long about 8 km coastal path runs in a constant up and down between 30-80 m Again and again, you can descend to sandy beaches. The ocean water is turquoise blue and crystal clear.
The dwarf palm is the emblem of the park. In the spring you meet many orchids. Stone Age caves and small pastoral houses are along the way. One of the stone houses have been restored and serves as a museum. Here the fauna and flora of the park is presented.
The top of the Zingaro, it can be up to 900 meters high mountain can be climbed, the scenery here is much more meager. The seldom crossed paths worthwhile if only because the magnificent views.
To visit the park lo Zingaro's worth and you should take a couple of hours time and do not forget the summer bathing suit and even catering. Good footwear is called for.

The Cathedral of Santa Maria Nuova at Monreale Cathedral is the archbishopric of Monreale in Sicily. It bears the title of a papal basilica minor, and is dedicated to the Virgin. The Cathedral is famous for its Byzantine mosaics and the cloister.
he Cathedral is 102 meters long, 40 meters wide and 35 meters high. Its façade is flanked by two side towers, the left tower was never completed and the dome of the right tower in the 16th Century, was destroyed by lightning.
The facade was in the 18th Century neo-classical portico vorgebaut who makes the initial impression of the facade destroyed. Above the portico or parts of the overlapping of the blind arches can be seen with existing decor inlays in the Arab style.
The west door was having a size of 7.8 meters by 3.7 meters, the largest portal of its time. The bronze doors were made in 1186 by Bonannus of Pisa. They show images of 42 scenes from the Bible.
The north side is preceded by a portico. Here is the side entrance, which were also made of bronze existing door panel 1179 of Barisanus of Trani.
In the apse of the Cathedral of the original decor is best seen. Ogival blind arches overlap and are provided with inlays of black, white and yellow stone.

Some information for your trips to Sicily.

For cyclists, mountain bikers and hikers Sicily is ideal, there are several natural parks and protected areas with nature trails and beautiful, marked hiking trails. E.g. "Riserva naturale dello Zingaro" in Trapani, not far away from the residence (beautiful cliffs), or the "Riserva naturale Cava Grande" (several cave tombs and beautiful beaches), or a nice day trip to "Parco regional dell 'Etna "to name but a few of them.
Then mention the temple of Segesta, one of the best preserved buildings of the world and was not meant as some built by the Greeks, but the Elymi. The Elimi-populated with the Siculern Sicaner and the west coast of Sicily before the Greeks discovered the land and were a mixed race between the natives of Sicily and migrated to hermits.
The most significant cities were Erice, Segesta and Entella.
Segesta was a boom town back then, she survived the Greeks and Romans, but by the incident of vandalism have destroyed large parts of the city of Segesta, and so fell into oblivion. In the Middle Ages, of this city nothing more is known and the name was a household name even for a few.
The sacred building has a length of 61 meters and a width of 26 meters and is decorated with 36 Doric columns, all of which are well preserved and still standing.
The ancient amphitheater on Mount Barbaro at an altitude of 400 meters above sea level. altitude above sea level and is also built remarkably well preserved.
The temple is surrounded by nature and belongs to the province of Trapani. Who wants to visit the temple and the theater was the A29 Palermo - Trapani take and take the exit to Alcamo at Segesta. Well worth a visit to Eden case, because the temples are really well received. All other religious buildings in Sicily have not received half as good as this, apart from the Temple of Concord in Agrigento.
Landmarks are Balestrate e.g. The cathedral, built in 1843 and the Byzantine stronghold "of Calatubo Castle", built above the cliff, and was probably rebuilt later by the Arabs. Since these traces which Arab culture, it is assumed that those who have been involved in the reconstruction.
Palermo, the capital of Sicily, is worth a trip. The Kapuzinerkatakomben visit with a stroll through the lively Capo Market. Or visit the historic center of Palermo. Visit the cathedral from the 12th Century (begun 1184), or the Church of St. John of the Hermits (1132), or Cappella Palatini (private chapel of Roger II) in the Norman Palace. Visit the Cathedral of Monreale (12th century), a masterpiece of Byzantine mosaic art, 6340 square meters of gold mosaics depicting the old and new testament. Visit to the neighboring cloister of the Benedictine monastery.
To Sicily including the Aeolian Islands, the Egadi and Pelagie islands, each with its own character.
Sicily is reflected by a mountainous and hilly side of contrasts. Colorful cities, idyllic mountain landscapes, picturesque beaches, and colorful flowering orchards adorn the central island in the Mediterranean.
Everywhere there are reminders of class-preserved ancient times as well as later periods: the splendid Greek temples and theaters etc.
Taormina, Agrigento, Siracusa, the beautiful mosaics of Villa del Casale, the Baroque of Noto, Ragusa and the church from the Norman times in Cefalù and Palermo everywhere tells the story of themselves
The coast has a varied and wide choice of beaches, ready with long, beautiful beach promenades.

Hinterland
In the hinterland there is much to discover Original. Here you can find many "romantic" mountain town, and there are numerous opportunities for hiking and trekking holidays. In addition, the island to be conquered on horseback. The path leads through varied landscapes with dense forests, hills and mountains and lakes with subtropical vegetation - and again one encounters ruins and excavations of ancient cultures.